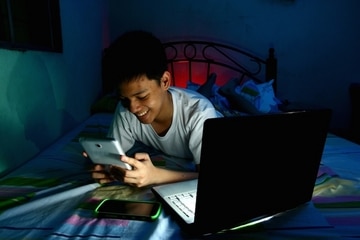 Anyone with a teenager (or pre-teen…) at home will be well versed in the ‘get off your phone!’ mantra.  It’s an epidemic amongst these guys – whatsapp, Instagram, snapchat…words we had never even heard of just a few years ago.  Contrary to what my own teen thinks, I will admit that it’s not all negative. I get that it’s a huge part of their social life.  I even vaguely get the curious need to see what everyone else is up to in their lives, every minute of every day. Perhaps that’s the FOMO in me #fearofmissingout.

Many teens have a veritable technological playground in their bedrooms – televisions, computers with 24 hour a day internet, phones, game consoles. This allows them incessant access to their peers (and indeed strangers, but that’s for another blog). The pressure to be part of this world is intense and their participation is addictive.

However, how does all this impact on our kids long term?  It starts and ends with sleep.  Or rather lack of it.

The recommended amount of sleep for teenagers is between 9-10 hours a night but it is unlikely that there are many teenagers who get anything close to this.  A research study recently carried out on almost 10,000 16 to 19 year olds found that almost all of them use one or more electronic device just before going to bed. This in turn resulted in difficulties in getting to sleep, often taking longer than an hour.

So what’s the solution?  A complete ban on all screens at home? Nice idea but let’s face it, pretty unrealistic if we prefer not to be accused of ruining their lives (which we apparently are anyway).

A good starting point is a discussion with them about the detrimental effects sleep deprivation can have, such as anxiety, decreased ability to concentrate and understand information, increased likelihood of making mistakes and having an accident, slower reaction times (which is particularly dangerous behind a wheel), a suppressed immune system, headaches, excess weight gain…the list goes on.

As with younger children, setting clear boundaries on what is acceptable screen usage is helpful.  Obviously it would be preferable to have these guys on our side but if necessary, some slightly tougher love for their own benefit may be required.  The wifi gets turned off at a certain time, the phone stays downstairs at night (and definitely gets charged downstairs as not only does it avoid the lengthy night-time screen time, but there are serious health implications to charging devices in bedrooms), and no TVs in bedrooms are all good starts.  You will be vilified when they next get access to their virtual world, but that’s our job and it’s only because we love them!

Teens and their screens are always going to be tough to separate and we as parents, can only try do our best but at the very least, let’s try to do that.

"Why Do I Feel Exhausted During The Day, But Can’t Fall Asleep When I Go To Bed?"

We fall asleep when we feel tired at night, right? Not necessarily. For a significant number of people, getting into bed can trigger a host of anxieties around sleep. Get advice on how to encourage better sleep with our useful guide.